On Friday (30.08.2019) in Tallinn/Reval, Estonia, about 80 people (Estonians, Baltic Germans, German minorities and Russians) gathered in the beautiful, historic hall of the Academy of Sciences to celebrate the opening of the 15th Domus Revaliensis Days.

Dr. Peter Wörster (Germany) reported on how the resettlement took place and how infinite difficulties had to be overcome for every resettlee in a very short time. In 1939, all Germans living in the Baltic States were able to resettle. They were settled in Warthegau.

Toomas Hiio (Estonia) had worked out very precisely how the resettlement from Estonia would proceed. He also determined what the sudden loss of the Baltic Germans in all areas of life meant for Estonia. The Baltic Germans left their homeland, where they had taken root for 800 years, lived and strongly influenced the country.

At the reception that followed, acquaintances were refreshed and much more was discussed about the historical event of the resettlement of a part of the population of Estonia and Latvia.

On Saturday morning, a small crowd gathered at the Freedom Monument on the Cathedral Hill for the laying of a wreath to commemorate the Estonians and the Baltic Germans, who had worked together from 1918 to 1920 for their common homeland against the Bolsheviks and, in part, lost their lives.

Pastor Burghardt described the situation of the time and its consequences.

Afterwards the participants and other guests went again to the large hall of the former v. Ungern-Sternberg-Haus to listen to the sounds of the Baltic concert.

Alo Poldmäe, Estonian musicologist and composer himself, had once again succeeded in engaging outstanding Estonian musicians to perform German-Baltic and Estonian compositions (Leonora Palu – Flauto, Kuno Kerge – Baritone, Diana Liiv – Piano). Before each piece Alo Poldmäe explained the life of the composer and his music.

The afternoon included a visit to the Tallinn Museum of Architecture. A very interesting museum, which is especially concerned with modern architecture in Estonia.

Next door is the old Tallinn industrial estate, which has developed into a popular district of its own – for locals and visitors alike. It is a heritage site.

Old warehouses have been restored and offices or apartments have been built in them.

Many restaurants and shops have settled there and create a homely atmosphere.

Actually we intended to visit the city wall tower with its museum.

Unfortunately, we could not do that, because it is currently being restored.

The evening belonged to the sociability. Festively dressed Estonians, Germans and Russians sat together at different tables in the house of the teachers at the Rathausplatz. Some of them got to know each other, talked lively and enjoyed the buffet.

The Sunday (01.09.2019) began with the prayer in the old Heiliggeist-Kirche, which was held by the German pastor Matthias Burghardt. He gave us the tools for the next days.

At the end we sang together the Baltic song – “Bless and Protect”. At 11.00 a.m. the bus started for a big trip to Estonia.

We visited the resettlement memorial for the Baltic Germans in Saka, which stands at the Gulf of Finland on a steep coast. The property belonged to the former estate of the German family Levis of Menar.

A symbolic monument with an open window into which three storks fly.

We drove on to the Purtse fortress

We also visited a very steep waterfall, which unfortunately had no water when we visited it.

In the former manor house of the family v. Toll Kuckers/Kukruse there is today a comprehensive, lovingly furnished museum KUKRUSE (Polaarmois) about the research and expeditions of the polar researcher Eduard von Toll.

Even a large room for children has been set up in the house, where they can do research or carry out their own experiments.

The 15th Domus Revaliensis Days 2019 ended a wonderful day with many experiences and sightseeing in beautiful nature.

Again we have experienced how important and connecting these diverse cultural days are perceived.

We are very grateful to the Federal Ministry of Culture of Germany for these opportunities to get closer and closer to our native people and to become friends with them. 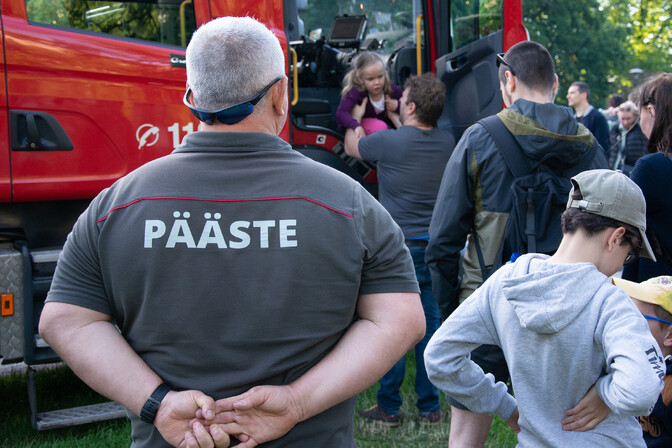